On the verge of their second release 'Catch A Wave', Donegal alt-rockers Don't Fear The Natives will be looking to follow up the success of their 4-track debut, the Stupid Heart EP as singer Claire McDaid explains.

"Stupid Heart has done really well for us, iTunes Top 20, airplay nationally and globally, radio sessions, Single of the Week on loads of Irish stations, and great reviews from the likes of Joe.ie.....where the video was the most views for a new Irish band...!! Amazing!!"

After a busy summer of gigs, including a Firestone Stage headline slot at Vantastival, the band encamped into the studio to start pre-production on the songs that will become their debut album.
The forthcoming single Catch A Wave came out of those sessions.

"We're really excited for the new songs, they're an extension of what came before with the EP. We love to rock it out, but there's an edgier, occasionally delicate side that we love exploring, the vulnerabilities of relationships, the heartaches, and sometimes those small victories in between.

"An anthem for broken hearts, with Claire’s soaring vocals wrapped in a maelstrom of
spiralling guitars" IMRO

"One of those songs that really, really, grabs you!" Amazing Radio UK

"...Cracking debut release!....We can't help but think of Joni Mitchell when listening
to our Stupid Heart favourite, 'This Tide Will Turn'. In short, Don't Fear the Natives
are definitely ones to watch....!" Laura Harff, Hot Press

"bringing back those summers you had as a kid....crunching guitars similar to The
Cranberries Zombie...a really strong debut offering..." Chris Jones, Irish Jam Radio UK

"Stupid Heart E.P is a substantial offering for a debut and leaves room for the band
to continue to grow.." Aine Cronin-McCartney 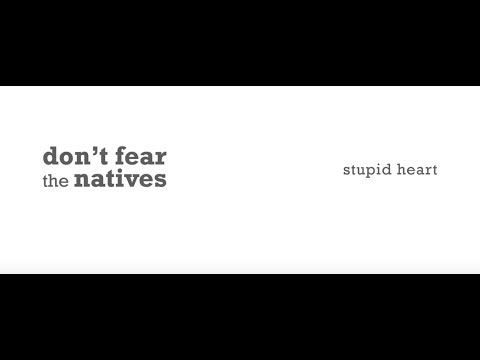