Department are a three piece indie band from Dublin formed in late 2012 by Dean Robert (vocals), Wayne Farrell (guitar) & Stephen Markham (keyboards). Dean & Wayne met at a party where there was a jam session going on in the kitchen between a few bands, one of which Wayne happened to be in at the time. Wayne says “I just remember we’d break in to a song & there were these incredible harmonies coming from the other side of the room. No matter what song we played this tall guy in the corner didn’t miss a beat, we played rock songs, soul classics, ballads, reggae tunes...he could sing it all. Way better then we could!!”

So suitably impressed Wayne approached Dean about working on some new material he’d been writing & the two hit it off spending hours each week recording demo’s in Wayne’s flat. After about six months & a few acoustic gigs Dean was introduced by a mutual friend to keyboard player Stephen. Dean says "The minute Stephen started playing the keys we all knew it just worked, it added a whole new dimension to Department & the sound of the band grew."

Gigging throughout 2013 saw the band grow their fan-base with a serious of increasingly well received acoustic shows culminating in a sold out show in Whelans (upstairs). After the success of their acoustic shows Department added a drummer & bass player for gigs & played the rest of 2013 with a full band playing another sold out show in Academy 2.

At the end of 2013 the band met producer Phillip Magee (Kodaline, Miles Kane) & decided to spend 2014 writing, developing their songs & working hard on their sound in recording sessions with Phillip.
Those sessions turned out to be the makings of Department’s debut EP which is scheduled for release in late spring 2015. The first song to be finished in the studio was ‘Cut Me Down To Size’ which the band decided to make their debut single, releasing a video to YouTube on January 7th 2015 with the single following on 2nd February.

"This single has really whetted our appetite, Department's sound is perfect for radio" - Joe.ie 'Song of the Day'

"Department have the sort of charm that will overrun the Irish top 40 chart in no time" - Dublin Concerts.ie 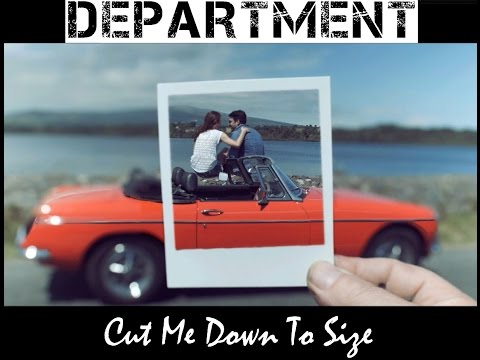