the Funeral Honors is a Russian-American rock band formed in 2008 in Philadelphia, USA. The band is comprised of Damon Walker (lead vocals), Michael Rubin ( guitar, vocals), Iggy Glukhof (bass) and Damon Laver (drums). Kamil Gorgeous left the band after the release of their 2008 debut album, Bad Dreams Still Mine.

theFuneralHonors origins date back to 2005, when Damon Walker and Michael Rubin decided to form a synth band, influenced by Depeche Mode and german synth-pop bands. The band called Crucial, with Damon on vocals and keybord and Rubin on guitar and synths. They`ve mostly tried to copy the other synth bands, trying to find their own sound, and in 2006 the band self-released thier demo-album "Disappointed Eyes". Crucial started to do gigs in local synth-oriented bars and cafes, gaining fan-base and searching for promoters. The band needed a label, but after a year of fruitless searches, the guys quit this idea.

Soon after the Crucial collapsed , Damon and Michael switched to guitars, and harsh vocals. Though the synth-sound still prevailed on their new tracks , the greater influence from bands like Metallica, Three Days Grace, Breaking Benjamin, was obvious. After approx. 6 months of creating new material guys`ve had nearly 20 demos, and were searching for a studio to record the album. Damon says: "We decided not to go on with the idea of us being a synth band, thats why we wanted a new band, with the brand new name". The name was a problem for a long period of time, when finally was found in the "English phrasal verbs vocabulary" before the first gig. Michael: "The club asked the bands name, so we had to find it quick just before the show, otherwise the gig would be cancelled"

The band started doing gigs and gained some popularity in the underground scene of Philadelphia, even thought they`ve had to call for additional musicians at every show. The problem was actual even after Kamil Gorgeous joined the band as the permanent second guitar. After Kamil joined the band, they`ve decided to rent a studio to record the debut album of The Funeral Honors. For that purpose, guys had to sell all their musical equipment, and ask Damons classmate Antony to become a partner and a manager of the band. Antony sold his old car, thus the required amount was found and the recording began. 10 tracks, 9 new, and one from the early synth-pop period, re-arranged Kingdom On Sand, included on the album. Tim Young from Metropolis Mastering Studio, London, mastered the album.

Slicethepie and the Moscow period

Gigging was pleasant, but the financial status of the band was poor, while recording new tracks required money. In 2009 Damon found fan-fundraising site slicethepie, a service that connects talanted musicians with investors and fans. After nearly 9 months of rallying and promoting, the trio from Philadelphia have reached their financing target of $10,000, and finally started putting into place plans to record a brand new EP.

Guys have had a lot of material from the previous sessions, but they`ve also made 6 new demo tracks. For a long time they couldn`t decide what tracks should be picked. The new tracks were played on every TFH show, to understand whether the tracks are worthy to enter the EP. At the end they`ve picked 3 tracks to be included on the EP. Michael found out that recording would cost less if they record in Moscow, RF. Damons family, along with Michaels lived in Moscow for a month or two each year, and had property there, so there were no problems for a band to get to Moscow and find a studio. By that time Kamil realized that he`s not ready for the next step, and announced that he is not excited about making music anymore. So Damon and Michael had to move to Moscow as a duo.

The recording took a lot of time, due to the fact that guys had to find musicians. They`ve placed an ad on russian music site musicforums looking for a bass and drums. Damon Laver and Iggy Glukhof responded, and after two auditions they joined the band, initially on a trail basis as a studio session members.

Meanwhile, TFH tracks are played on BBC radio in the UK, and on some local Moscow stations, gaining the band additional audience. After a month in the studio the tracks for the EP were ready. While the band was preparing to release the EP, the russian promoters invited the band to take part in Metro On Stage 2012 festival, held by Metro newspaper, after they saw the band playing one of their shows in a local Moscow club. On Metro On Stage 2012 the band exploded the crowd with their sound and energy. From that moment guys decided to stay in Moscow for a while, realising what a grateful audience is here. From that moment Damon Laver and Iggy Glukhof became the official members of the band. 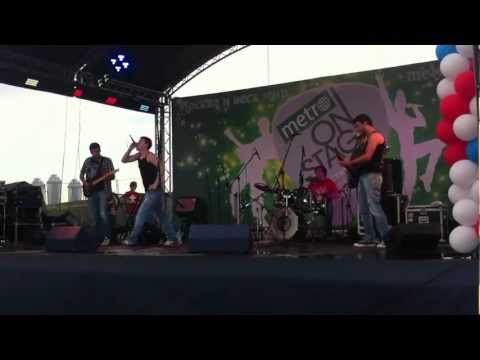