We are a Dublin ROCK band originally formed from members of Mongolia (Dunchee: drums, Tob Swift: bass) and Terrordactyl (Owensie Owens: guitar and vocals) while both of these bands were on hiatus, with the aim of writing some psychedelic/ stoner/ garage rock anthems to get us through the dark Irish summer.

The original concept was formed more or less over a weekend at the Roadburn Fest in Holland in April 2008, during the consumption of many good beers, blemmers, space cookies and mushrooms. By the end of the dark summer, as the sun re-emerged from the black clouds above us to waste it's distant rays upon our frost painted hills, the initial project had taken on sufficient momentum to continue as a realistic band. The irony was not lost on each band member equally. "Ha ha ha", we laughed, heartily. Except Dunchee, who did one better and realized his long-term plan to move down under to Melbourne, Australia. In stepped Ruari Conaty, ex-fellow band member of Puget Sound with Owensie from back in the day. Out stepped Ror several gigs later to make way for Kenn Sweeney (Easpa Measa, The Boy You Hit is Dead...).

Having recorded our first demo with Dunch before he departed these shores, the renewed lineup continued to gig, tour around the cosmic-wind swept isle and create in the rehearsal studio of reality, composing more songs from the vast bulk of material that we have generated over this time.

Kenn vanished to unknown parts of the western plains in August 2010 with session player extraordinaire Ruari Conaty stepping in briefly again ahead of the return of the hēmisphairion migrant ,Dunch, who rejoined in October 2011.

This summer sees the emergence of a cosmic fear, a fear of the infinite universe, the galactic realities incomprehensible to the human mind; a creation of our small brains; constricted by the institutions which suppress our imagination, our visions of the past, and of the future, directing us ever closer to our own oblivion.

Within the immediate surroundings of the more tangible rehearsal studio, where invisible waves collide in unison and reverberate, shaking the ground upon which we stand, legs wide, our heads and hair ever rocking back and forth, we travel to and fro, across time AND space, from the confines of the practice room to the margins of orion, from the small streets of Dublin to the colliding galaxies and expanding systems of the distant universe, the Train carries on.... ROLLING DOWN THE TRACKS INSIDE YOUR MIND NOW!!!
_ _ _
_

Self-styled in their own lyrics as “rolling down the tracks inside your mind” Realistic Train are a brilliant, strange band riveted in the tradition of loud sound and lolling heads. Their members have crazy-good pedigree"...[Owensie plays gentle acoustic songs under his own name and was part of the tremendous Terrordactyl and Puget Sound, Tob Swift plays guitar in Wizards of Firetop Mountain and is the bassist in Mongolia and Dunch fronts Wizards of Firetop Mountain and drums for Mongolia]...There are no certificates for this kind of thing but if there were, they’d probably come graphed on drum-skins, signed with hallucinogenic ink and hot-wax-stamped with the tusk of a narwhal. Just imagine...I wanna go to the margins of Orion. An album is due soon so…who even knows?
(harmlessnoise.wordpress.com)

REALISTIC TRAIN formed in Dublin during 2008 and features member of MONGOLIA and the much hyped WIZARDS OF FIRETOP MOUNTAIN so they’re obviously no strangers to churning out excellent stoner infused rocking goodness to tap your foot and nod your head to. Their self-titled demo from 2010 consists of four deadly tracks worth of big riffing, infectious rock. Highly recommended listening. 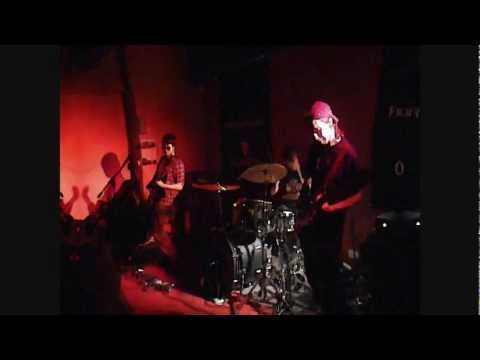