Other
Banbridge, County Down

Sit back and let ¿Que-Pasa? blow you away with a mix of childish jokes, incorrect spellings, and a mediocre-at-best understanding of musical theory.
Billed as everything from, “The best Swez band in the multiverse,” to, “not bad for a bunch of specky, f***ing teenagers,” ¿Que-Pasa? formed out of two guys with an odd affinity for Elton John and Chicken Supremes.

Upon realising that an electric guitar, a bass, and a tambourine on a stick does not constitute a ‘band’, ¿Que-Pasa? began its search for a drummer - then promptly fired him in place of an older, more attractive, English neo-percussionist known to most as Keelan Brown. Headlining prestigious events like “Craigavon’s Got Talent” may have proven too much for some, but not ¿Que-Pasa?. Oh no, their desire for a bigger, better, brassier sound remained unquenched after being rejected by Andrew Cox - “What makes you think I want to be in a band who pronounces ‘¿Que-Pasa?’ wrong?” - the guys got another guitarist off the street.

Two months down the line, and with the purchasing of a Spanish Dictionary, Coxy jumped on the bandwagon - becoming the first member of the fledgling band who fully understood the meaning of the words andante and cazzo. It was only a matter of time before the 12 month old child prodigy, Zacc McGloughlin joined the ranks, followed by the most useless band member - the ukulele player.

After several months of gigging, ¿Que-Pasa? settled on a new sound and line-up, saying farewell to their beloved bass player and promoting the other musician who played an instrument with four strings to the prestigious position.

“The jokes may start to wear thin after a while.” - Rigsy, Across the Line, BBC Radio Ulster

“Spelt with one of those back to front question marks.” - Rigsy, Across the Line, BBC Radio Ulster

“Yous are only f***ing specky teenagers, but you were f***ing brilliant.” - Intoxicated Lurgan Man

"Tbh I still listen to them on Spotify" - Tara Griffin 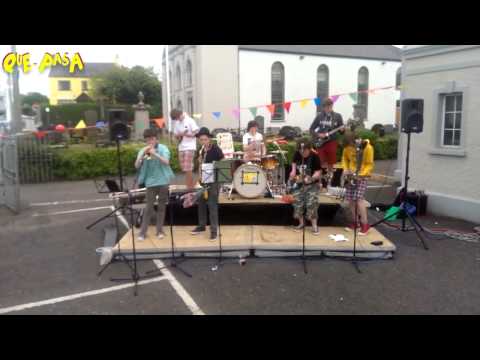