*Only Fumes & Corpses are currently on indefinite hiatus. Check out their Facebook page for updates on the members other projects.*

From the West coast of Ireland Only Fumes & Corpses are one of the country’s hardest working and persistent hardcore-punk bands. Since forming in late 2005 the band have toured across Europe several times reaching as far as Finland and the Basque Country as well as numerous trips to the UK. They have now played over 200 shows earning a reputation as one of the most ferocious and energetic live bands on the circuit along the way. OF&C have shared the stage with the biggest names in hardcore (they've recently been confirmed to support hardcore legends Hatebreed on their upcoming Dublin show) but will never be tied down to the genre. No posing, no clothing company endorsements and certainly not following any punk ‘rules’, playing from the heart with a DIY spirit and ignoring trends and fads is what this band is all about.

Last year saw the release of the first EP in a 2 part series, Selfish Act I features 13 songs in just over 11 minutes it's available buy on a pay what you like basis (free is an option) on bandcamp now, along with their previous releases. http://onlyfumescorpses.bandcamp.com/

Reviews for Selfish Act I:

The Torchbearers for hardcore in their country – Big Cheese Magazine

Every time it finishes I realize that I'm standing in the middle of the room, fists clenched, eyes wide, delirious for more – so I start it up again and again and again, and every time I start it over I feel like I’m hearing an old favorite and the greatest new thing on the planet at the same time. – Mass Movement Magazine

The songs are short, punchy, violent outbursts and the high-speed nature keeps the pulse pounding throughout. As a soundtrack to leaping off speaker stacks or hurling Molotov cocktails at squads of Riot Policemen this will do the job perfectly – Punkprospect.com

Brutal, direct and uncompromising, there’s a mad-eyed, wild-dog ferocity to this. Teeth-bared, intense hardcore that rushes past with no grace; just jagged, uncomfortable destruction. Bare-bones, rattling hardcore punk that will rattle the teeth in your skull – Only Fumes & Corpses are a wrecking crew of haste and chaos. – keepitfast.com

You can almost feel the sweat flying from their brows, see limbs flailing against drums and strings. There's no pretending here. Clearly unafraid to play around with expectations of what a hardcore band should be or do, Only Fumes & Corpses have really captured their essence here – Thumped.com

The band manages to touch on a vast number of genres and influences whilst retaining a no-nonsense, aggressive punk approach. Maintaining punk traditions in the form of socially aware lyrics, the album also sees flashes of blastbeats, D-beat and Trash Talk-esque hardcore fury served up with some pretty impressive musicianship. This is an enraged, vital little record that will be sure to have people reaching for the repeat button as soon as the record has past them in a snotty punk blur. 4/5 – Twobeatsoff.co.uk

It’s completely contagious, full of power and colour, and guaranteed to get you fired up. That alone means it’s required listening 4.1 / 5 – Metal Ireland

One hell of an exciting EP to listen to...the fast paced movements throughout get you shifting, jumping, punching the air and thanking whatever God you believe in that there’s still proper, hard-faced and full on punk music being produced out there… will leave you wanting more, leave you shaking, and leave you knowing you’ve just stumbled upon one hell of a band…If you like proper HC-Punk, then this is a band you need to hear – Loud-stuff.com

An abrasive and cutting assault of violent energy and brutal intensity which no one could possibly ignore. Selfish Act I is an excellent riot of hardcore punk brought with skill, expression, and most of all passion. It offers all the destructive antagonism and will you could require in a release whilst giving it individuality to set Only Fumes & Corpses apart from most other similarly driven bands. Angst has never been so slight yet so impactful. – The Ringmaster Review 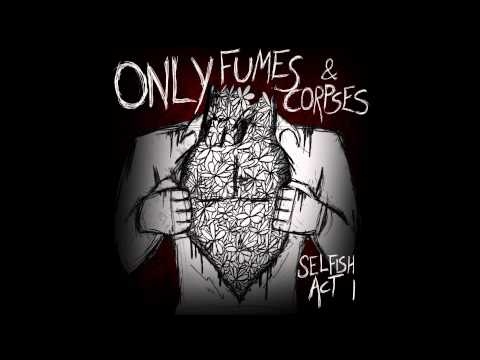