Entheos recently released their E.P " Where Creatures Meet" on September 30th 2012 and is available for FREE DOWNLOAD from entheosirl.bandcamp.com

Entheos are a well established six piece Dublin band that draws on their roots in the gritty side of rock, contemporary folk, classical and traditional music to create a grungy folk sound that is unique and consistently hard to define. Once described as ‘what you might get if Alice in Chains met Planxty in an opium den in Tangiers’, the various influences of the bands members are blended together and infused with a strong percussive backbone. Over the past couple of years Entheos have made a name for themselves as an energetic and engaging live act playing regularly in Dublin, around Ireland and in far flung places such as Warsaw in Poland, and have also played support to some of the biggest names in Irish music, including Damien Dempsey, Grada and Kila. They are due to release their new E.P ‘Where Creatures Meet’ in September 2012

‘Ten track album from this Irish based folk rock outfit. The album features a selection of classic old folk sounds blended with hints of Irish trad, eastern folk and world music. It’s an album that happily sees bodhran and djembe sit side by side.’ Road Records review of Entheos’s album, ‘III’

‘The most striking feature of Entheos is (the) quality grungy vocals. These vocals along with the celtic acoustic rock sound makes Entheos a band which stands alone genre-wise. The strong lyrics can be very atmospheric and dark in nature but also show that (Entheos have) much to say’ 2UIBestow Music Blog review (10/12) 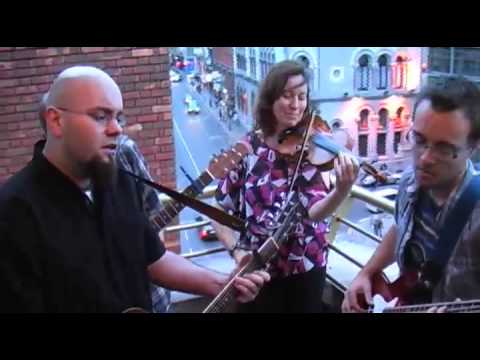