Though officially tagged as art-rock, Cloakroom Q. cannot be easily filed into any one genre.
A critical moment in their story is September 4, 2016. On that evening at
the Electric Picnic festival, LCD Soundsystem played a thrilling show, causing some
musicians to return home to South Down with revelatory glints in their eyes.
There was already a vague feeling amongst some like-minded players that they could
do something imaginative. Now they were emboldened. They could become upstarts
with synths, loops and dynamic tension. They had the encouragement to mess with
the idea of stage performance – to consider primary colours, smudges of make-up and
even mock fights on stage. Their mate had a shed-full of electronics and these
disparate figures from the vicinity of the Mourne Mountains came together for gigs in
Newry and beyond.
“Everyone was just free to do what they wanted as long as everyone was happy at the
end of it,” they recall. “The whole point was that there was no point. It was very
liberating.”
They were also listening to Swans, Slint, Pavement and Death Grips. They experimented with
spoken word and confessional themes – voicing thoughts about trauma, pent-up grief
and paranoia. Early in 2018 they isolated themselves in the west coast of Donegal and
realised that a more ordered musical pattern was asserting itself. A second stay to
Donegal a year later saw the debut album emerging from intense sessions in a
converted chapel.
The album will reach the public in 2020. Side one contains the darker, formative
expressions. The flip side bears witness to a new mood that is perhaps even optimistic
in places. During one songwriting occasion they took the imagery of a jet pack flight and used it as a metaphor for the importance of modesty and the dangers of unfounded narcissism.
“We’ve never shied away from writing funny songs,” is the party line.
Cloakroom Q moved to Belfast two years ago. Their closing statement for 2019 is a
song they recorded for the Oh Yeah Music Centre and their talent development
programme, Scratch My Progress. ‘Leave Me At Lusk’, titled after an
imagined flight to freedom on the way to Dublin Airport, is a paranoid tale of isolation and reclusion.
“This is the concentration of our sound,” they say. “It’s something of a mission
statement.” 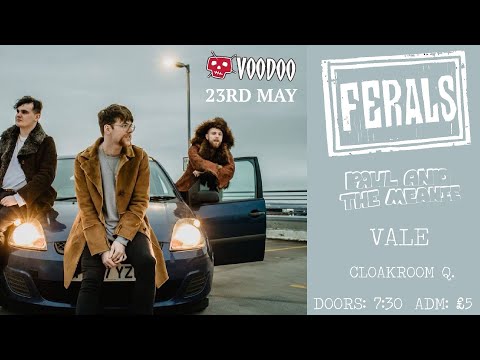